When it comes to restrictive agreements, Serbia still has a system of individual exemption based on prior notification to the NCA. And since the NCA has recently published a summary of all exemption decisions it adopted during 2017, it may be interesting to look at these in more depth.

The current Serbian system of individual exemption is effectively based in EC Regulation 17/62, according to which parties to a restrictive agreement had to notify the agreement to the European Commission in advance to benefit from an exemption. Apart from Serbia, some other countries in the Balkans have also followed this notification approach (Montenegro, Bosnia and Herzegovina) while some already have an exemption system based on self-assessment (Macedonia).

The number of exemptions on the rise

Each year, the Serbian NCA renders around a dozen individual exemption decisions. This number has been on the slight rise in the last five years, reaching 21 in 2017:

Exemption decisions across industries – but one dominates 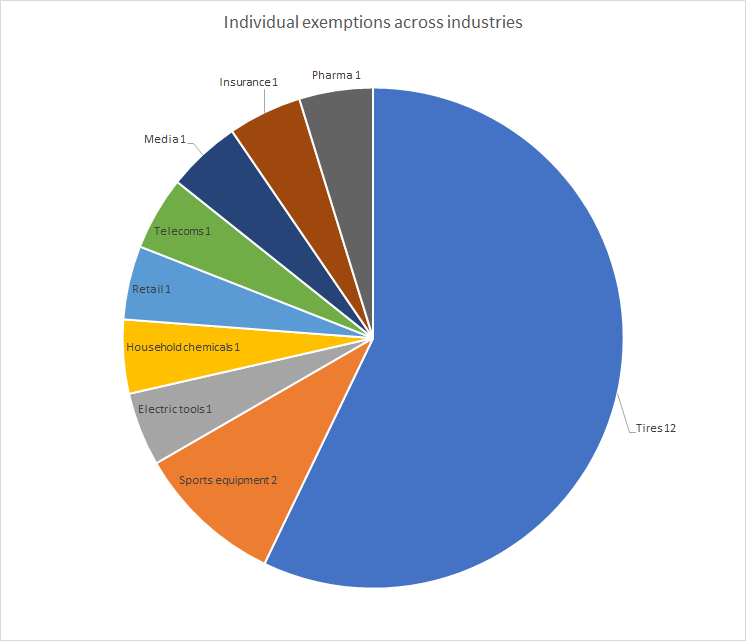 Where to go from here?

As I’ve argued earlier, perhaps an optimal solution for Serbia would be to introduce self-assessment of restrictive agreement, while at the same time keeping the possibility of notification. This way those who prefer legal certainty could still notify the agreement, while those who wish to rely on self-assessment can also have it their way. I remains to be seen whether the drafters of the new Competition Act will opt for such a hybrid solution, or rather switch to self-assessment (as the NCA hinted recently).

Merger Filing in the Balkans: The App