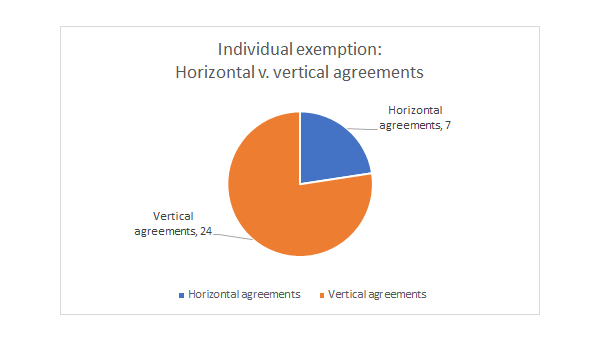 During the previous year, the Serbian national competition authority (NCA) individually exempted from prohibition as many as 31 restrictive agreements. What were they about?

Serbian system of individual exemption: Like in the EU in the old times

Serbian competition law still has a system of individual exemption of restrictive agreements based on notification to the NCA. This means that, in order for their agreement to be able to benefit from individual exemption, the parties must turn to the NCA in advance, i.e. before they start implementing the agreement. In a way, this system is comparable to the one which in the EU existed under Regulation 17/62, where an agreement had to be notified to the European Commission to benefit from an exemption.

How many agreements did the Serbian NCA exempt in 2020?

According to recently published data, during 2020 the Serbian NCA individually exempted 31 restrictive agreements in total. In addition, in six other cases the NCA dismissed the individual exemption proceedings, mainly since it found that the agreement it was examining did not amount to a restrictive agreement and therefore needed no exemption. That brings the total number of individual exemption cases in the last year to 37 – a significant number, especially when compared to a much lesser number of antitrust investigations the NCA conducted during the same period.

So, how do these 31 decisions break down?

Exemption per industry – insurance and tires industry lead the race

The individual exemption decisions in 2020 were unequally spread over different industries. In that context, the largest number of exemptions (six each) pertained to insurance and tire industry, respectively: 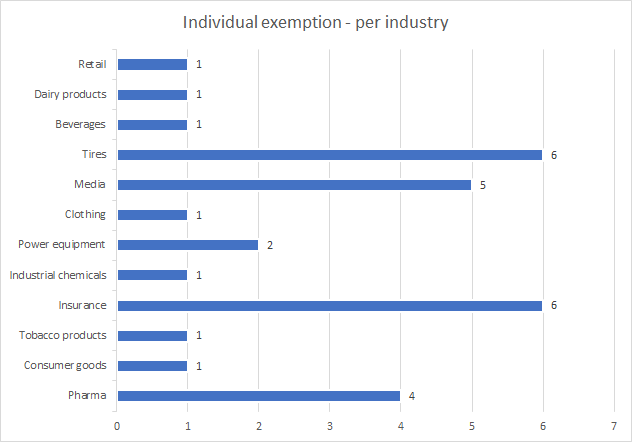 The exemptions in the insurance sector were mainly about joint participation of insurance companies in public procurement proceedings,  while the agreements exempted in the tire industry concerned vertical agreements for the resale of tires. 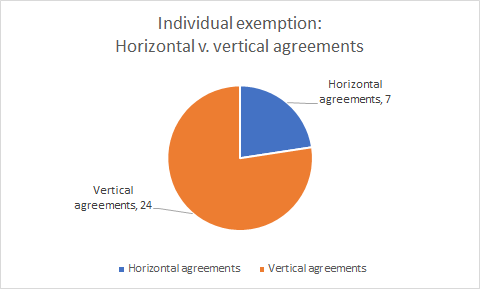 The horizontal agreements were mainly those pertaining to insurance companies (please see above). As for the vertical agreements – they came across all kinds of industries and were very diverse in nature and duration.

Another way to look at the exemption decisions the Serbian NCA rendered in 2020 is to consider how many of the decisions were unconditional and how many were with strings attached. Specifically, when exempting a restrictive agreement, the Serbian NCA may also impose certain reporting or other obligations on the parties.

In the previous year, the Serbian NCA much more often exempted agreements unconditionally, with only two exemptions coming with strings attached: 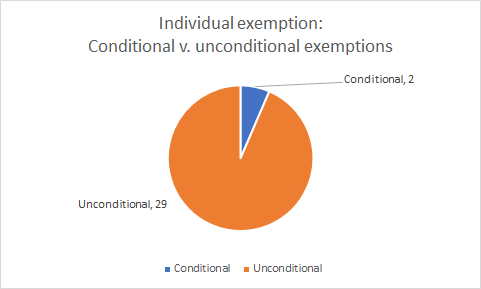 According to the Serbian Competition Act, the NCA may exempt a restrictive agreement from prohibition for a period of up to eight years. During 2020, the NCA’s exemptions significantly varied in duration, ranging from only six months to the maximum period of eight years (the latter being the longest individual exemption the NCA has granted to date).

For those who love statistics, the average duration of exemption adopted in 2020 was approx. two years and 8 months, while the median duration was exactly two years.